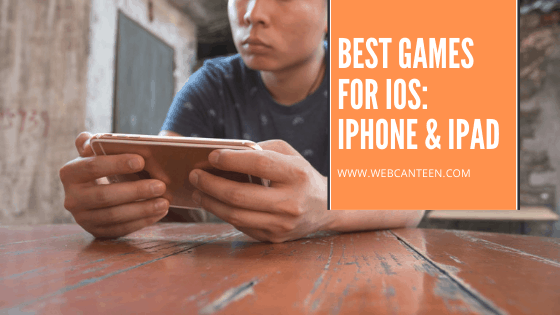 There are Millions of IOS games in the App Store. It includes many Puzzle, Strategy, Action, and Multiplayer games with some realistic graphics.

Some Best Games For IOS Devices Which you will never stop to play.

Best Game on IOS for players who like strategy games to play.

This Game offer some fun levels, some challenges, and the always loveably Easter eggs throughout the campaign.

The storyline of this game is very simple and easy to understand.

This game is like a Tower Defence game where you have to upgrade those towers and also you can use heroes to kill enemies. Kingdom Rush Vengeance is the Best Strategy Game for IOS.

There are over 80 million Dragon Masters means 80 million players who play this game everyday.

Dragon City Mobile is an online multiplayer game where you have to fight with other Dragon Masters with your best Dragon you have trained.

This game offers over 500 different Dragon and you have to feed them and train them to level up and fight to collect rewards. and you have to build whole Dragon City on Floating Island.

The main feature of this Game is its Pokémon-style Multiplayer Battle Experience which is mind-blowing makes it Best Multiplayer Game for IOS.

This game is A story of beauty and illusion.

#11 in Puzzle games which make it Best Puzzle Game for IOS.

Basically in this game, you have to Guide a mother and her child in magical architecture.

Best IOS Game, I have ever played with illusionary pathways and delightful puzzles.

The main feature of this game is its beautiful Audio with individually crafted puzzle stages.

This Game is about life, loss, and hope.

This game has hand-drawn landscapes, animations and an emotionally compelling soundtrack by SCNTFC.

By spending Just 0.99$ you will get this amazing puzzle-solving game developed by ZeptoLab.

In this new Cut the Rope game you have to feed two cute monstres which brings twice fun to play.

Plants vs. Zombies™ 2 has received more than 200 million overall downloads which make it the Best Strategy game for IOS for free.

It includes Hundreds of plants and Zombies where you have to protect your brain from zombies using plants.

Battle across 11 crazy worlds, from Ancient Egypt to the Far Future, and beyond.

Plus, ready your best defenses – Dr. Zomboss is waiting to take you on at the end of every world!

The stack is the best block-stacking game with endless cont of blocks.

Where you have to make the highest score as you make possible.

The stack is a Simple & Beautiful graphics designed game for any age of kids.

This is the Best ios game for free to play and makes you feel relax and calm.

There are millions of games in App Store but the Above shown games i personally played and liked very much.

I also made an article on 10 Best offline games for Android.

1 thought on “Best Games For IOS: iPhone and iPad”