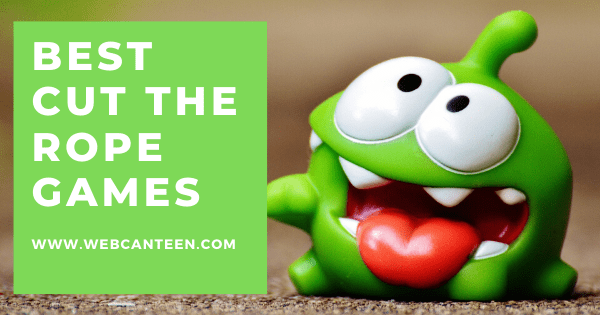 With hundreds of millions of app downloads Cut the Rope Game series game with Om nom character is one of the most popular puzzle-solving video games which is made by ZeptoLab.

Om Nom is the main Character of Cut the Rope games where you have to simply cut the rope and feed the candy to om nom. This game series with individual one contains lots of levels and mini-stories.

Here are Top 5 Cut the rope Games with a brief description.

This is a kind of simulation game where you have to fed om nom by fruit to save the forest and unlock new cute monster characters with new locations.

At this time Om Nom: Merge is under developing process but sill you can pre-register it to get a notification when it comes live on play store.

Since 2007, ZaptoLab is improving and making other games based on this one. we can say that Cut the Rope is origin one of all cut the rope series game.

The most likable key feature of this game is it contains 17 boxes with 425 levels, Outstanding graphics, “Om Nom Stories” animation shorts and much more.

This game was awarded by:

This game sees Om Nom being transported to a storybook world where the levels involve magical elements as well as battling an equally candy-loving wizard.

After more than 960 million downloads, the Cut the Rope series returns with a magical new sequel.

Also, Om nom can transform in:

This game was released on 19 December 2013 which expands on the previous games with a greater emphasis on story.

In this game, you will meet new friends of om nom: The Nommies and hop with new locations like lush forests, busy cities, junkyards, and underground tunnels.

• Roto can carry Om Nom to the best candy catching locations. Nom noms, yummy!
• Lick can make small bridges with his tongue to help Om Nom reach his goal.
• Blue can lift Om Nom to new levels of candy hunting fun.
• Toss can throw objects up in the air. Use her to boost Om Nom, candies, and your problem-solving skills! • Boo can scare Om Nom to jump to new heights.
• Snailbrow bravely rolls on walls, ceilings and pushes candies around, like a boss.
• Ginger can burn away obstacles between Om Nom and the candy.

This game was released on April 18, 2013, here Om Nom travels back to the time of his ancestors.

If you are looking for Offline android gamed then visit 10 Best offline games for Android.

And for Ios(iPhone/iPad) games visit Best Games For IOS: iPhone and iPad.